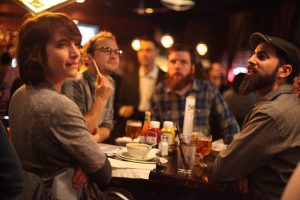 Trivia nights are on the trend! During a trivia night, the DJ reads trivia questions split up into different categories or rounds. The questions are then answered by different groups of people in an audience. These groups, also known as “teams” or “tables,” typically consist of several participants. At the end of each round, a representative from each team turns in its answers to a panel of judges who then calculate the scores for each team. The teams compete against one another with the top two or three teams receiving prizes. Trivia nights also make for a great fundraising option for charities!

Events We Specialize In: